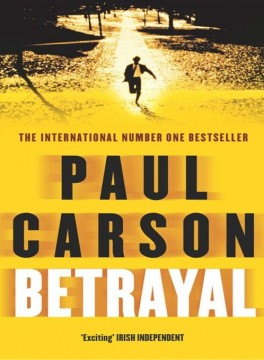 Dr Frank Ryan is CMO to Harmon Penitentiary, Europe’s most dangerous jail. Holding terrorists, serial killers, gang leaders, drug barons, arsonists and sex felons the Dublin institution is a seething, violent and drug-ridden hell with high rates of HIV and Hepatitis. Frank Ryan considers it perfect. The doctor has a strong interest in prisoner health issues and wants to further his research.

But Harmon simmers with mystery and intrigue, its inmates constantly plotting, always trying new scams. Soon Ryan is embroiled in a chaos of criminality. Lured from his fortress apartment in the dead of night he is attacked and abducted. When finally set free he discovers his girlfriend Lisa is missing, his ordeal denied by everyone, including police protectors and government ministers. All enquiries are met with lies, misinformation and betrayal. Determined to resolve the mystery and find Lisa, Ryan teams up with cell block king Dan Steele and goes to the very heart of the jail where he believes the conspiracy hatched.

I was half way down the stairs when the niggling doubts became major worries. The J-wing mistake jarred, it’s significance too important for a simple error. Shifting the recidivist inmates had caused a major stir, not easily forgotten. Why didn’t I read the caller ID? And the click on the line, was someone listening in? I stopped in my tracks, my heart thumping in my chest. Relax; I told myself, this could still be an error. It could be a genuine request with the warder just getting the blocks mixed up. Then the lights went out, plunging the building into darkness. I felt ice course up and down my spine.